Wednesday, October 2nd we made it to McArthur's Temple View RV Resort in under two hours. As mentioned in the last post, Freya seems to be doing better. Made a call to our Vet in Duncan, but she was in surgery late yesterday so I expect a call this morning.

Wow is this RV "Resort" rather upscale. They seem to have only newer motorhomes or large trailers as guests. Turns out, there is a Marathon Coach rally here at the Resort. Ray counted 27 coaches worth up to $2M a piece. Some serious change. We were lucky to get a spot for 4 days. I heard that by mid-October they are completely booked for the next 4 months. Definitely need to book in advance.

There is a fitness room, a pool table room, gathering room and outside pool and hot tub. I also noticed a laundry building. The way they stagger the units and allow your vehicle to park beside your unit, means a little more privacy/space between the actual units. Great design in a limited space. The best part is that they have great free wi-fi. They even lend you a booster to get a better signal.


Fred from Southern Utah Satellite Service arrived at 2 pm to replace our dish and PVR's to the new system. Here it's about 24C/80 F for him working on the roof. Youzers. He was totally finished by 5:30 with all our programming set up. Nice to have TV again!

Thursday morning at daybreak, Ray was out the door heading to Snow Canyon State Park for pictures. Freya had a good night thankfully. I heard outside that some of the Prevost Coaches were leaving so I rushed out with my cell phone to take a few pictures. I guess their rally is over. Turned out to be a mass exodus all morning. 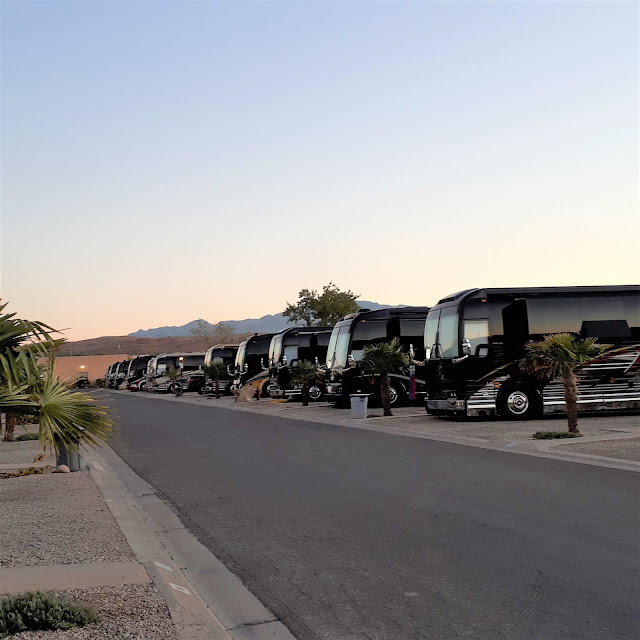 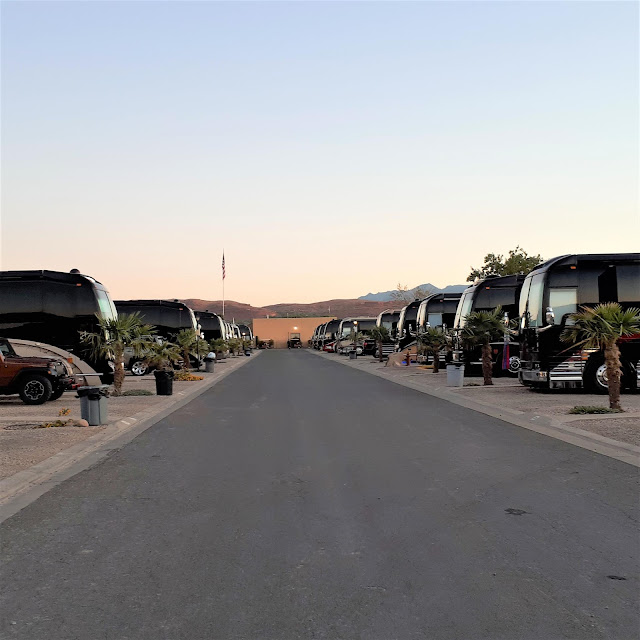 This RV park is called "Temple View" and sure enough there is a white temple up on the hill that is lit up. It will be a great picture for Ray to take another day.

Ray came back a couple of hours later with a big smile on his face. He thoroughly enjoyed himself and will probably go back at different times in the next two days for different shots. Here is a couple of my favourites from this morning. The different colours and textures of the rocks are amazing. Stayed tuned .. much more to come. 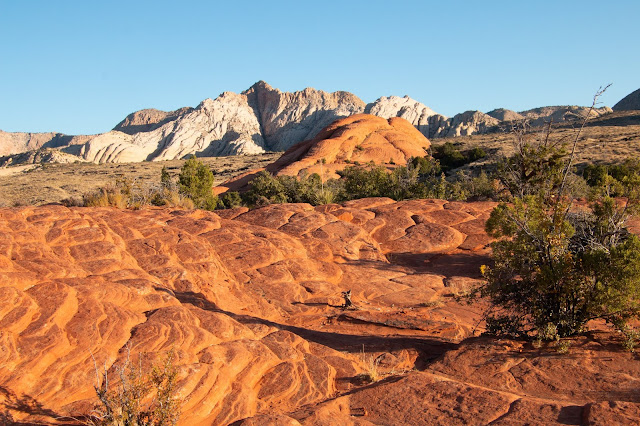 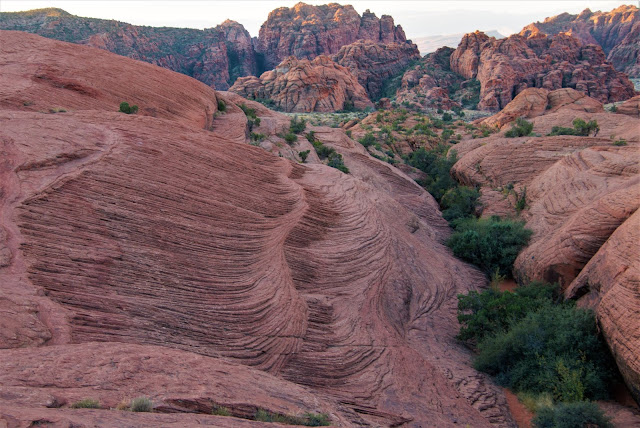 I spent the day cooking a big breakfast, doing laundry, making up a huge batch of chicken and rice for Freya and of course all the dishes that were made. lol She liked my new batch and had 3 helpings at different times today so she is eating and keeping it down. I was too tired to cook, so Ray took me out for Chinese Food buffet that was in walking distance (Ray here... oh ya the dog gets fed..). Food was pretty good. I called the Emergency Vet and was told to bring her in tomorrow after 5pm so we can get her prescription written. We watched our TV until 9:30 and then went to bed.

More of Ray's shots from yesterday and today. 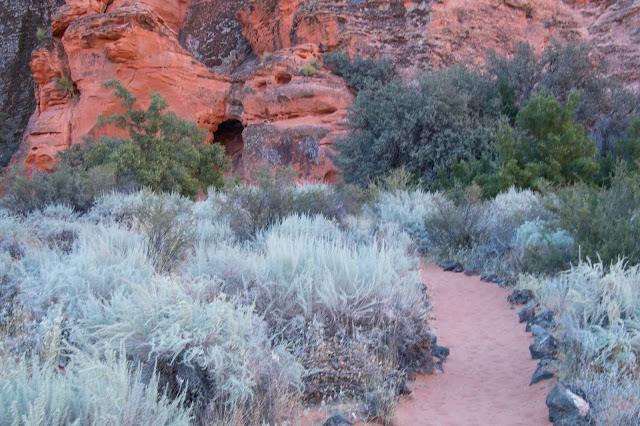 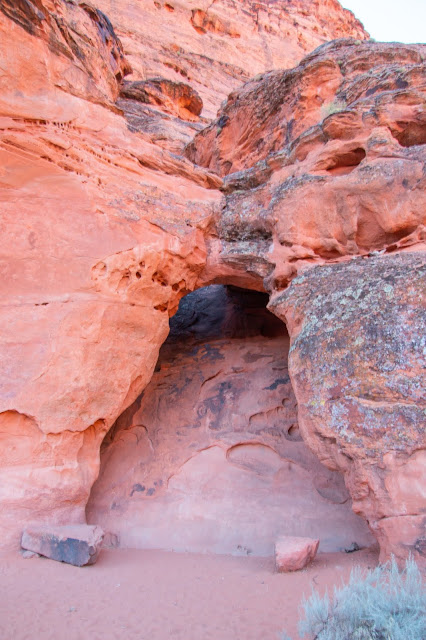 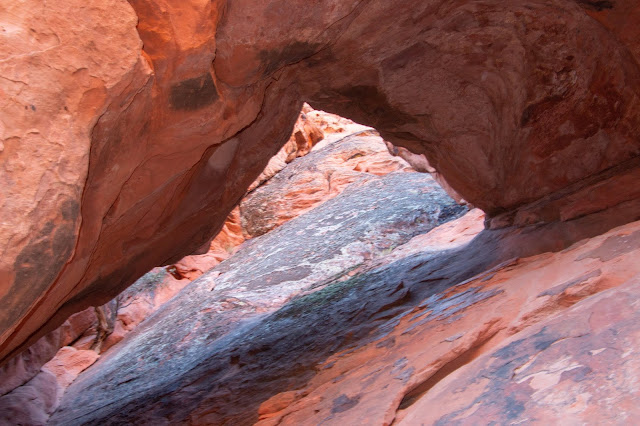 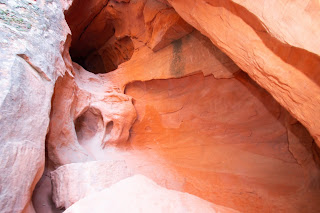 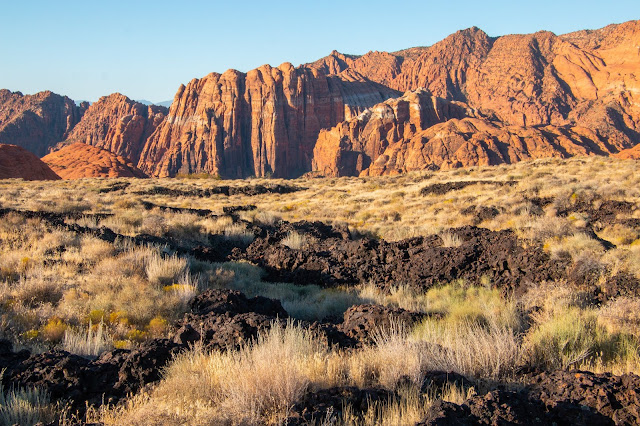 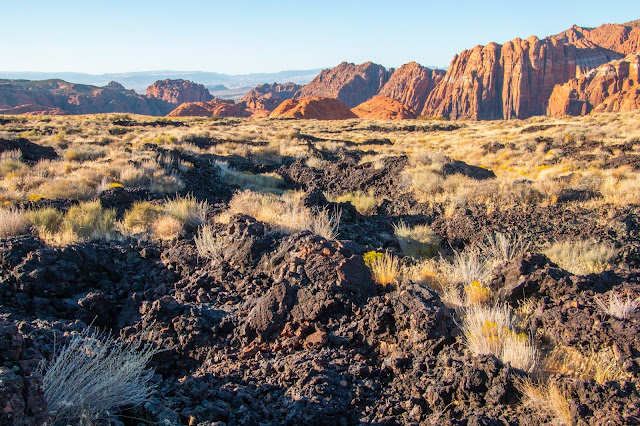 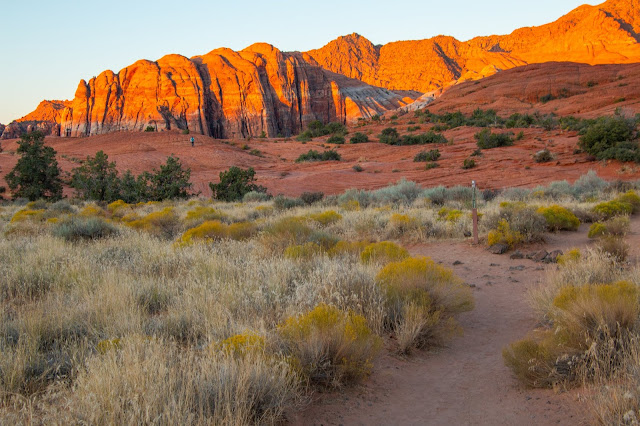 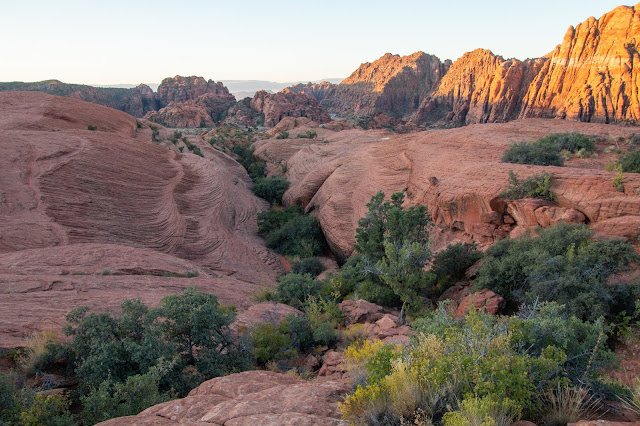 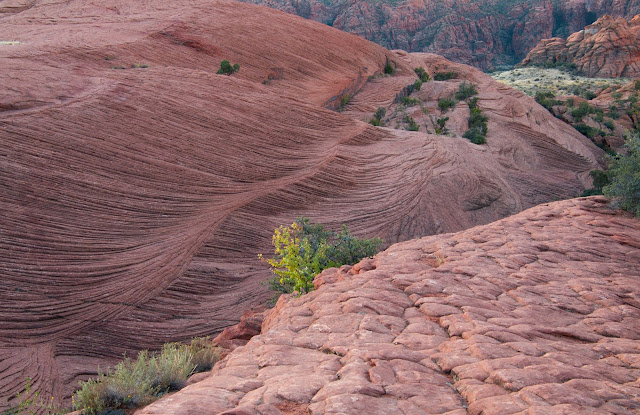 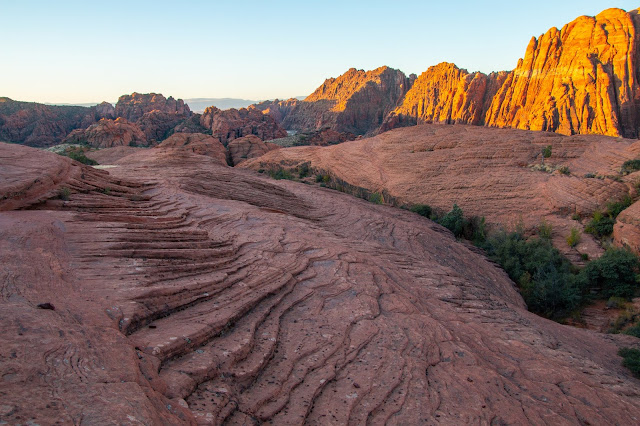 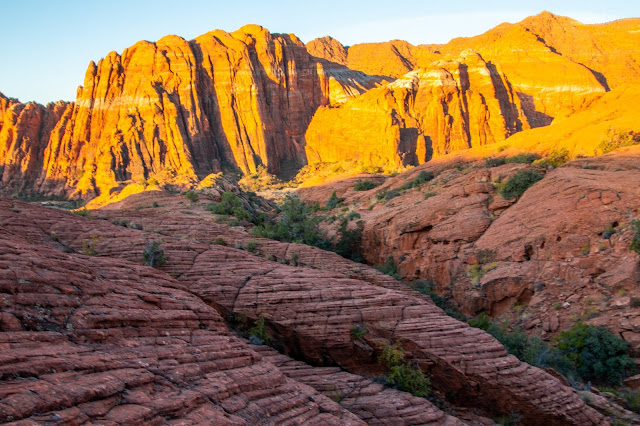 These small pebbles that they refer to as "marbles" are created as the wind and rain erode the petrified dunes releasing pebbles that had been trapped in the sand millions of years ago. 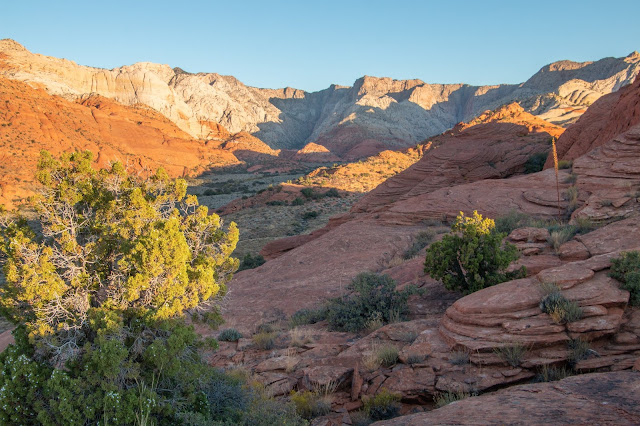 Park History
Created in 1959, Snow Canyon has a long history of human use. Anasazi Indians inhabited the region from A.D. 200 to 1250, utilizing the canyon for hunting and gathering. Paiute Indians used the canyon from A.D. 1200 to the mid-1800s. Mormon pioneers discovered Snow Canyon in the 1850’s while searching for lost cattle. Modern-day the canyon has been the site of Hollywood films such as Butch Cassidy and the Sundance Kid, The Electric Horseman, and Jeremiah Johnson. Originally called Dixie State Park, it was later renamed for Lorenzo and Erastus Snow, prominent pioneering Utah leaders.
Snow Canyon State Park is a 7,400-acre scenic park quietly tucked amid lava flows and soaring sandstone cliffs in a strikingly colorful and fragile desert environment. Majestic views and the subtle interplay of light, shadow, and color dancing across canyon walls evoke strong emotional responses from visitors.

Geology
Transported by wind more than 183 million years ago, tiny grains of quartzite sand covered much of what we now call Utah. These sand dunes, up to 2,500 feet thick, eventually were cemented into stone. Burnt orange to creamy white in color, Navajo sandstone, the predominant rock in the park, is what remains of the ancient desert sand sea. Over time, water has cut and shaped the sandstone to form canyons. Approximately 1.4 million years ago, and as recently as 27,000 years ago, nearby cinder cones erupted, causing lava to flow down these canyons, filling them with basalt. This redirected ancient waterways, eventually carving new canyons. Look up to see lava-capped ridges that were once canyon bottoms. Removal of rocks and minerals is prohibited.

Plants and Animals
Snow Canyon is home to a diversity of plant and wildlife species not occurring elsewhere in the state. Located at the intersection of the Mojave Desert, Great Basin Desert and Colorado Plateau, the park averages 7.5 inches of rainfall a year. Vegetation includes desert adapted species such as creosote bush, narrow leaf yucca, sand sage, blackbrush, scrub oak and desert willow. If spring and fall conditions are right, wildflowers light up the park with a showy display of blooms. Wildlife watchers may see coyotes, kit foxes, quail, roadrunners, leopard lizards, gopher snakes and canyon tree frogs. Thirteen sensitive species protected by state and/or federal law are found within the park. They include peregrine falcons, desert tortoises and gila monsters.

After I had done my chores this morning, Ray took me out to the Snow Canyon State Park so I could see all the beautiful rocks. These are the some of the pictures I took and more that Ray took today. Freya stayed at home. Most of the trails prohibit dogs due to the fragile environment. There are a few trails that you can take though, if you consult your park map.


Took this next picture just to show how big these dunes are. 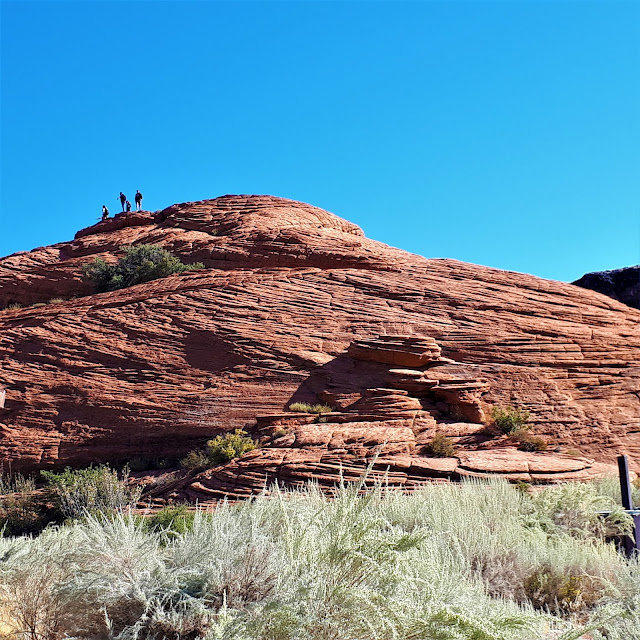 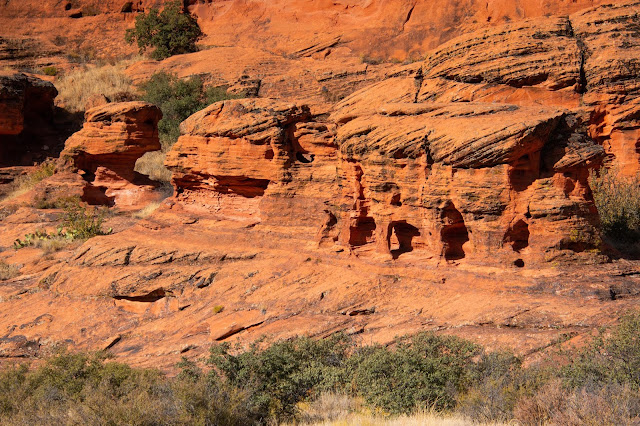 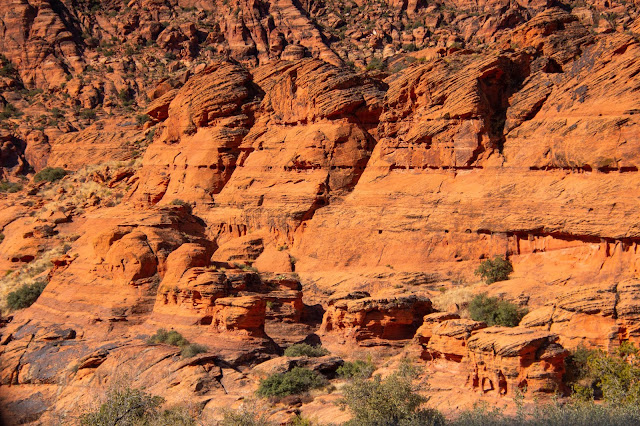 Earlier Friday morning, Ray was out before light taking pictures of the temple that sits on the hill behind us and that we can see from our coach. The Saint George Utah Temple sure looks gorgeous all lit up. 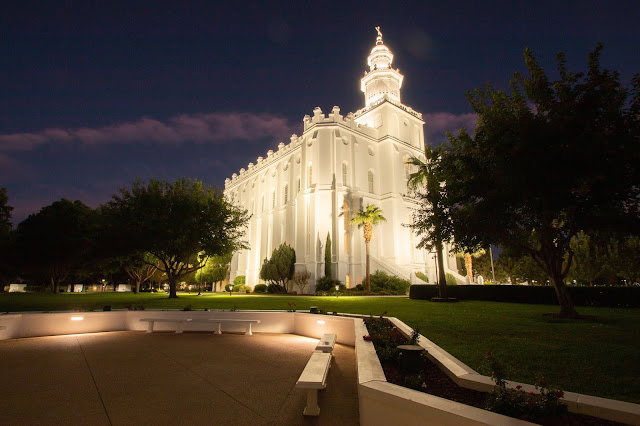 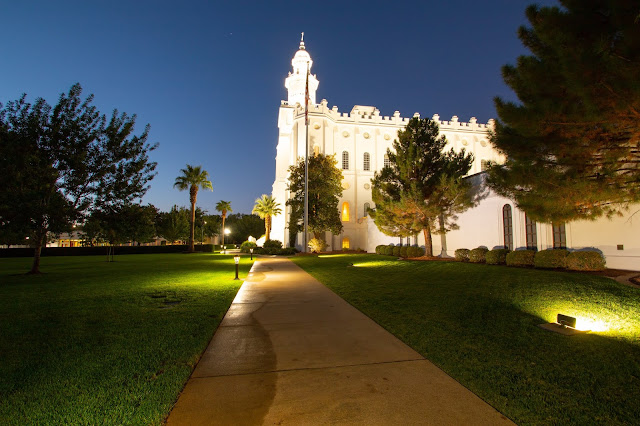 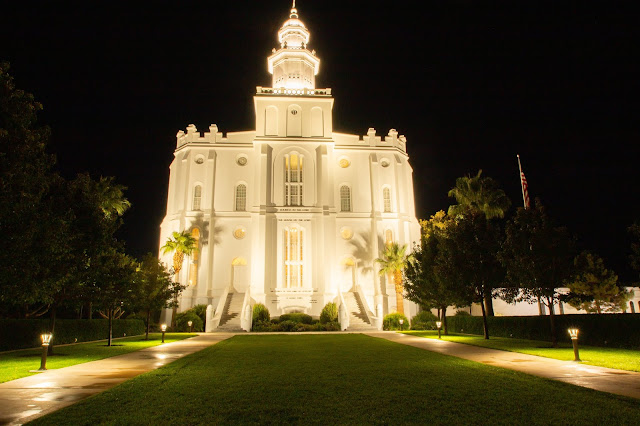 And my and Ray's favourite shot, the Temple and it's reflection. 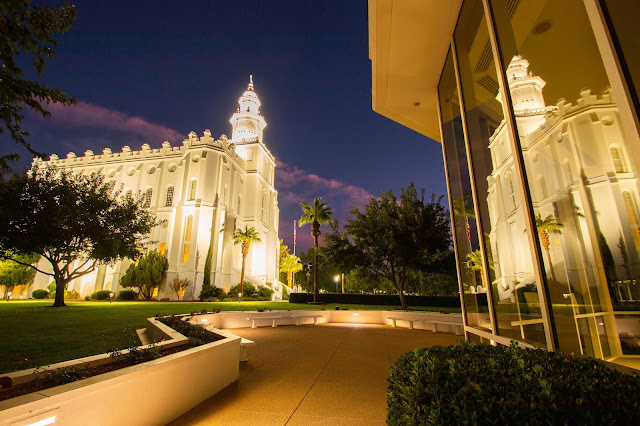 Freya's butt is much better. Got my prescription for her for "as long as she lives". So should not have any more problems getting her drugs through Walmart in any state down here. I can only get a months supply at a time.

Saturday morning another beautiful day. As we have an extra day here ... we are going to go and checkout Gunlock State Park a half an hour from here. We had planned to go to Virgin River Campground twenty minutes south of here, but just by a flook while Ray was checking out stuff to photograph near it a big "Closed for Renovations" until January 2020 popped up! So hopefully the Gunlock State Park will work as we need to leave the RV Resort tomorrow, Sunday, and have to stay in the area until I pick up Freya's drugs Tuesday afternoon.

Stayed tuned to the next post to see where we end up. (Ray here again.. ohhh, the suspense!) 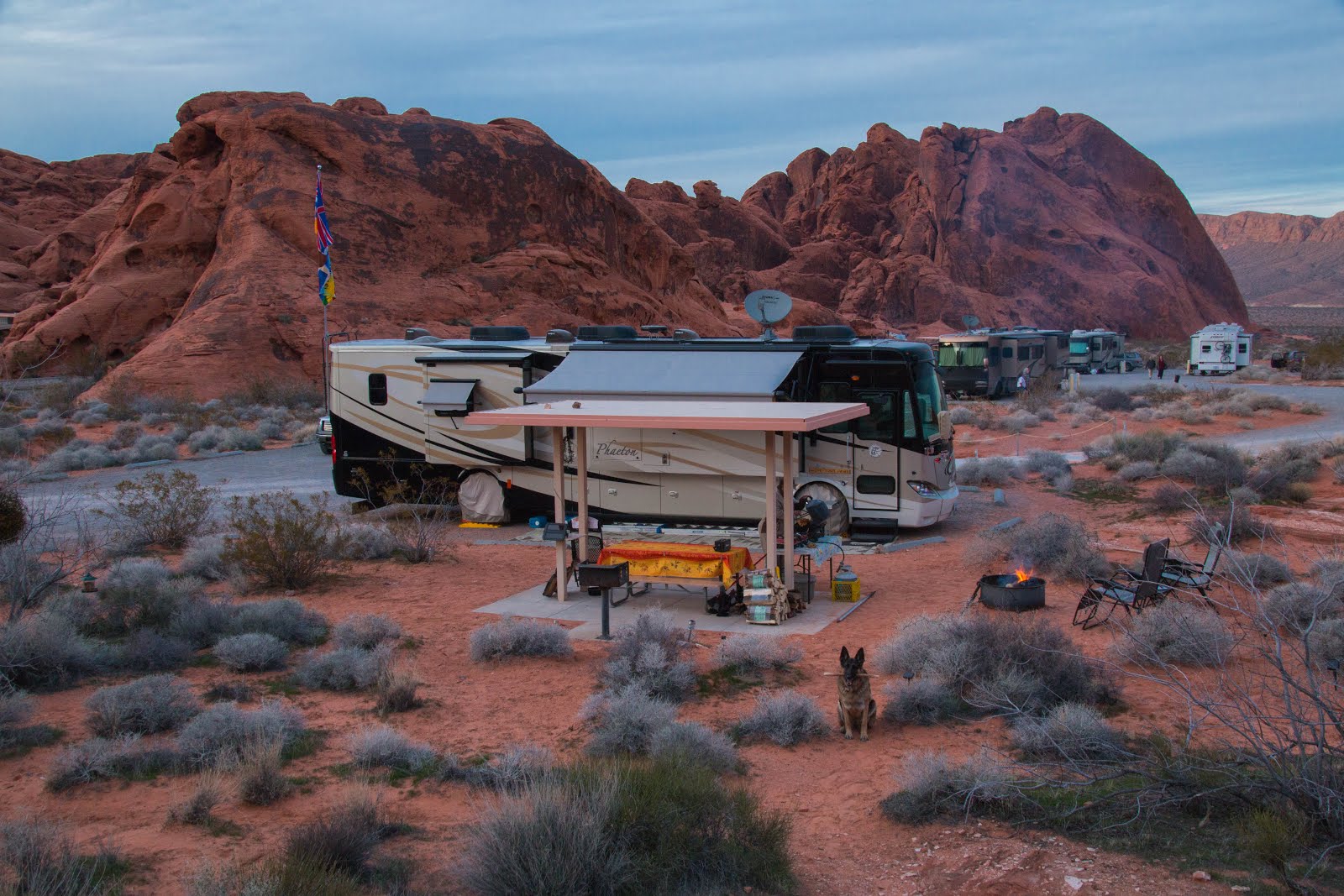 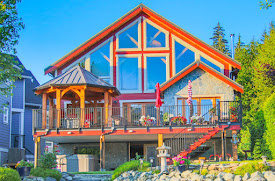 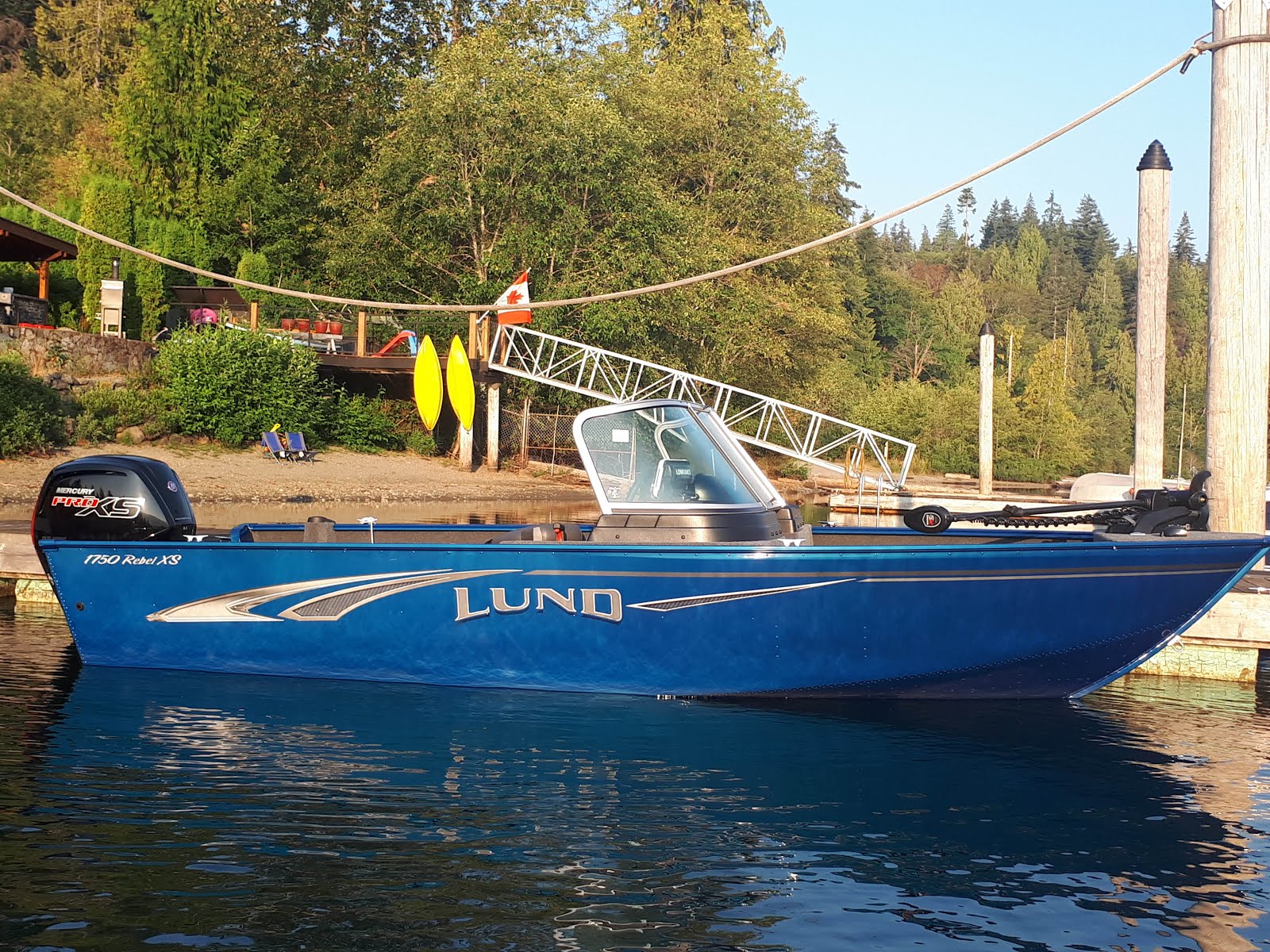 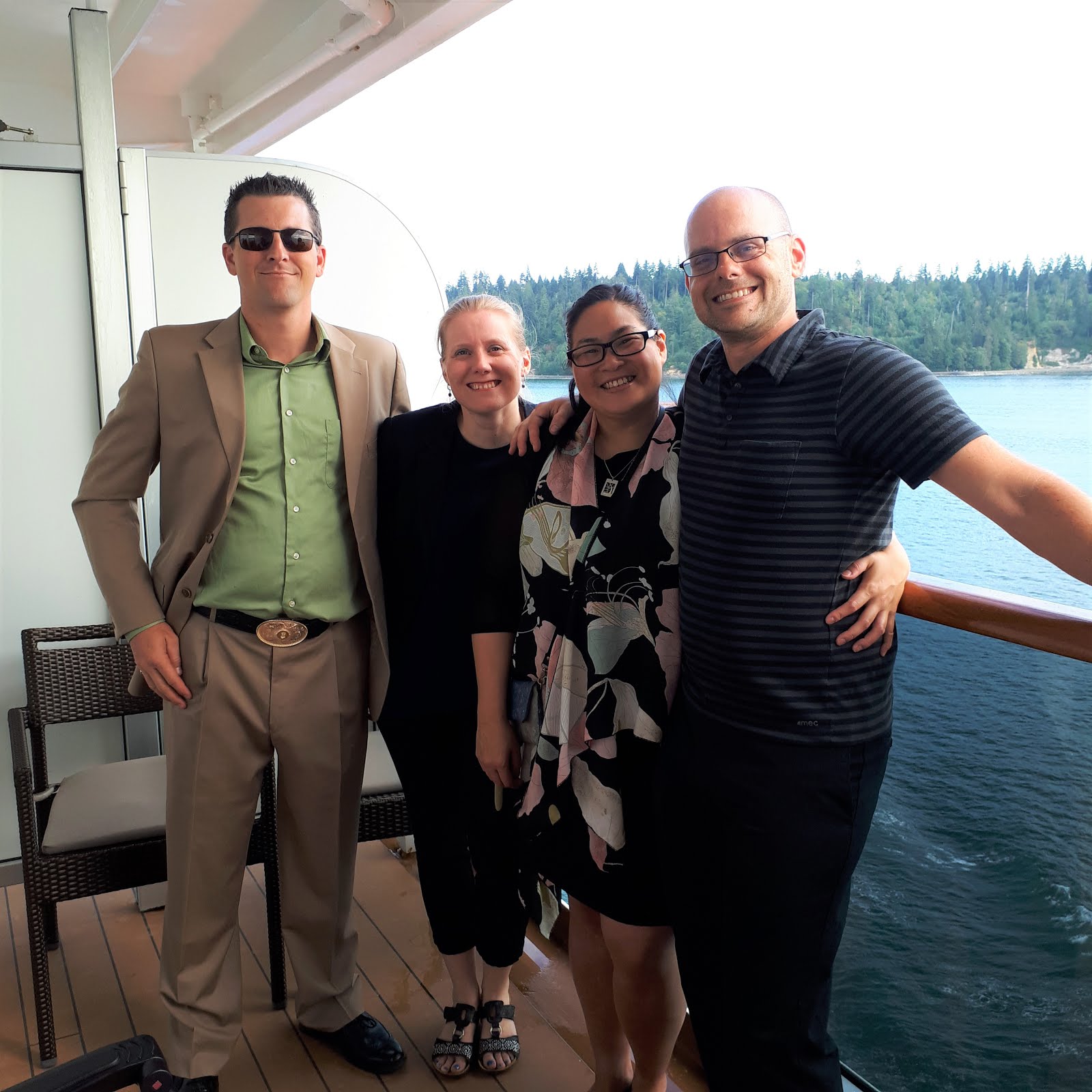 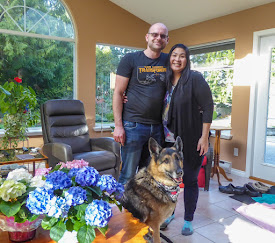 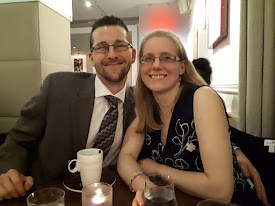